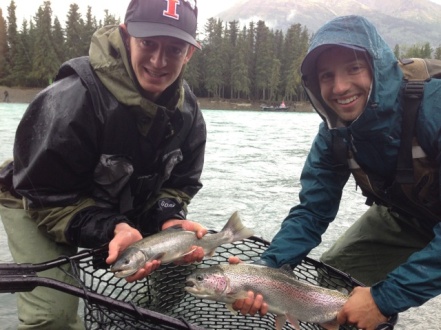 Last week, I had the privilege of fishing the Kenai River in Cooper Landing, Alaska with my brother who lived in CL all summer, my aunt and uncle – his hosts, and my friend Jason. After a whirlwind summer internship at Microsoft, being on the river was a salve for the soul. The simplicity of nature and the endeavor brought clarity. Similarly, in the past, I have found that nature and basic human interactions with it like hunting, fishing, and hiking often carry strong metaphors that distill the complexity of life into simple tenets. Trout fishing the Kenai was no different.

The man who leaves his line in the water the longest catches the most fish.

We fished for rainbow and dolly varden trout from a drift boat, using a fly rod to cast the bead – fake salmon egg – toward the shore and let it float down the river. The trout feast on these eggs during the salmon spawn, so they strike the bead, pulling down the indicator and signaling the fisherman to set the hook.

On the first day we fished , Jason, Daniel, and I were constantly casting, re-casting, and adjusting our lines. For a while we didn’t catch many fish because of our focus to get the line just right. After a while, my Uncle, nicknamed the Salmonator or the Salmon Whisperer for a reason, simply said, “the man who leaves his line in the water the longest catches the most fish.”

With one sentence, he taught us the most important lesson in fishing. It’s not “be the fish” or “use the best equipment”. It meant to spend time in a position where results can happen. It also implied that the surest way to be successful is to give time to an endeavor.

After being caught up with school and my internship at Microsoft, which were periods of time where many things tugged for my attention, I appreciated the reminder to prioritize time for the areas I want to be successful. As I start my fall internship at Tesla Motors in a week, I’ll be thinking of the salmon whisperer as I look for ways to be impactful during my time there.

The man who leaves his line in the water the longest catches the most fish.

2 thoughts on “Leaving Line in the Water”